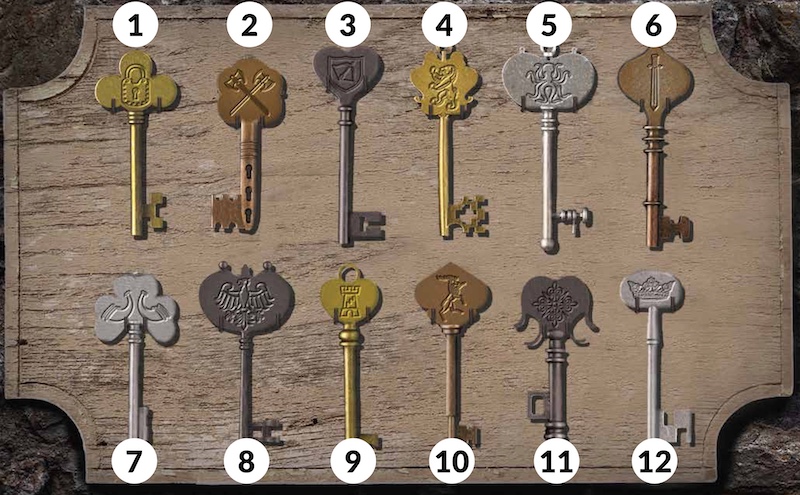 Which key does this correspond to in the hallway?

You consider , but it feels off. You decide to take a closer look.

You are confident in the solution but feel like the answer was too simple, too direct. You go to search the shelves of the Library again, but this time for the real books...

...Aha! This time you have success. In addition to finding the previous titles, you spot two books next to them that have yet to be deciphered. One is titled Love's Tulip Twirl by "CD" (with "1838" at the top) and the other is titled Peddler Faces Injured Hip by "JA" (with "1813" at the top). 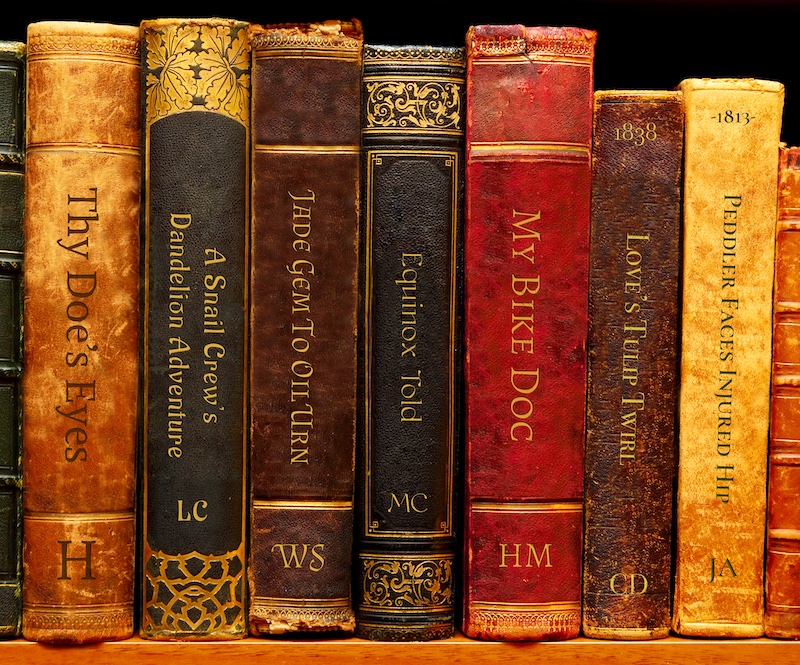 Hmm, something feels off about this solution. You decide to take another look.

You pull the shelf. It jerks subtly with a mechanical click. The bookshelf swings outward easily, and you notice a burned symbol on its backside. 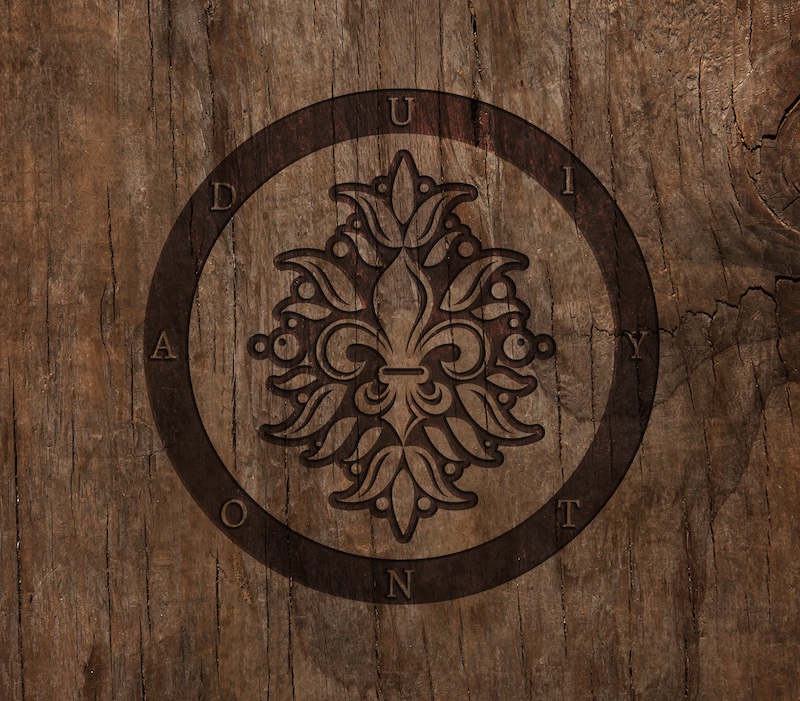 Inside, you find a small room with several slits in the walls. One slit is in the bookshelf you just passed through, providing a view into the Library. Another slit in the opposite wall provides a view of the Dungeon.

In one corner, a hand brake similar to the one you reattached on the train is mounted on the wall, with "Showstopper" engraved on a plaque below it. In the center of the room, you find a small table with a pile of newspaper clippings and a letter from Reager. You notice the back of the letter has the same symbol as the bookshelf. That likely won't be useful now, but you'll have to keep it in mind.

You may now open the Open When Instructed envelope.

Recap of Blackbrim (Game I)

The police officers in the small Victorian town of Blackbrim have been disappearing one by one. A package arrives at your door upon the disappearance of the final officer, Commissioner Farodson. Fearing that he too would be abducted by the mysterious figure known as Reager Skinner, the Commissioner instructed that the investigation materials be passed to you, the town detective. You are able to decipher the materials and discover that the officers are being held at Cordelia St. Manor.

Upon arrival at the manor, you are ambushed and knocked out by gas. You awake to find yourself locked inside. You explore the manor and find puzzles in each room. You decipher the puzzles, and in doing so, free the officers and escape the manor. Through your adventure, you learn that Cordelia St. Manor was Reager's childhood home, that Reager was christened Rose at birth, and that she had an older brother—Alfred—who she locked away, likely causing him to perish.

You have freed the officers, and the entire town of Blackbrim is grateful for your heroic efforts. Of Reager, however, there is no sign.

A year has passed since your first run-in with Reager. You begin to accept that the trail has turned cold until a letter from Captain Deione of the London Police arrives, asking for your help against Reager in the capital. Letter in hand, you board the next available train to London, though something feels amiss. As the train begins to move, you realize that it's empty except for you: it was a set-up. Each of the train compartments contains a puzzle left by Reager, which you must solve to obtain the train brake from a locked safe. If you fail, the train will crash into London's Victoria Terminal, killing countless citizens and yourself as well.

Your sharp wits enable you to stop the train moments before a crash. You learn that the original letter calling you to London was actually penned by Reager and that she has left a welcome package for you at Victoria Terminal. You must again solve her puzzles, which encode locations across the city, to foil her larger scheme. As you get closer to the deadline, you learn that she is planning to poison the city's grain supplies with arsenic, which could poison thousands of people. Thankfully, you stop her in time at the main grainery. Though she slips away, you rescue a haggard man who turns out to be her brother, Alfred.

You've now gained national recognition for your efforts against Reager, but unfortunately she has slipped through your grasp again.

The final step is to access the room beyond by placing the correct keys into the keyholes. 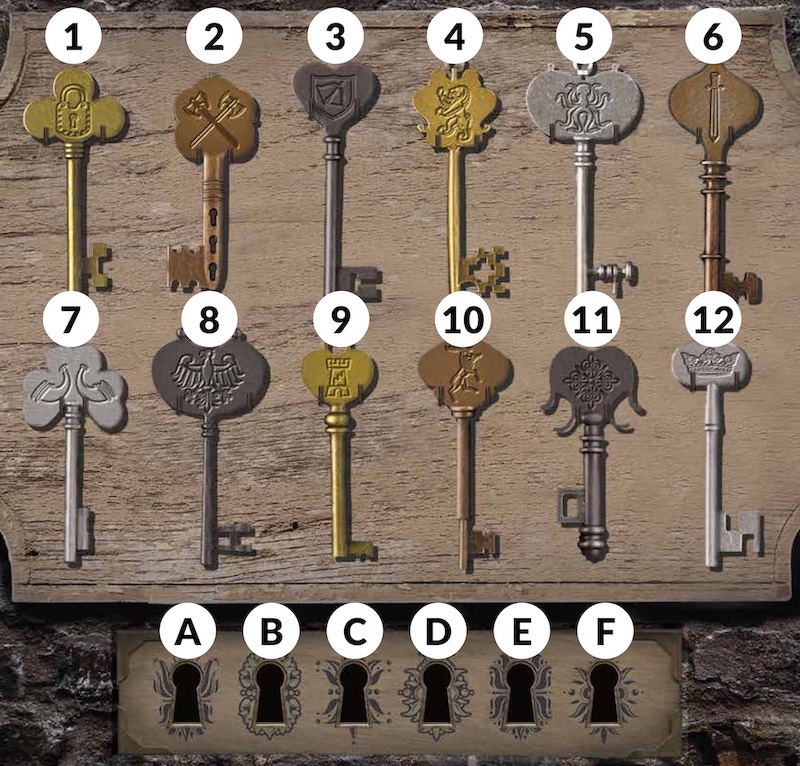 Which key should go in each keyhole?

You put the six keys in, but nothing happens. You take a closer look and try again.

Below are the list of items you should have for each part. If you are missing anything from Origins & Ends, click here.

To begin with, you should have a 'Read Me First' pamphlet for Origins & Ends.